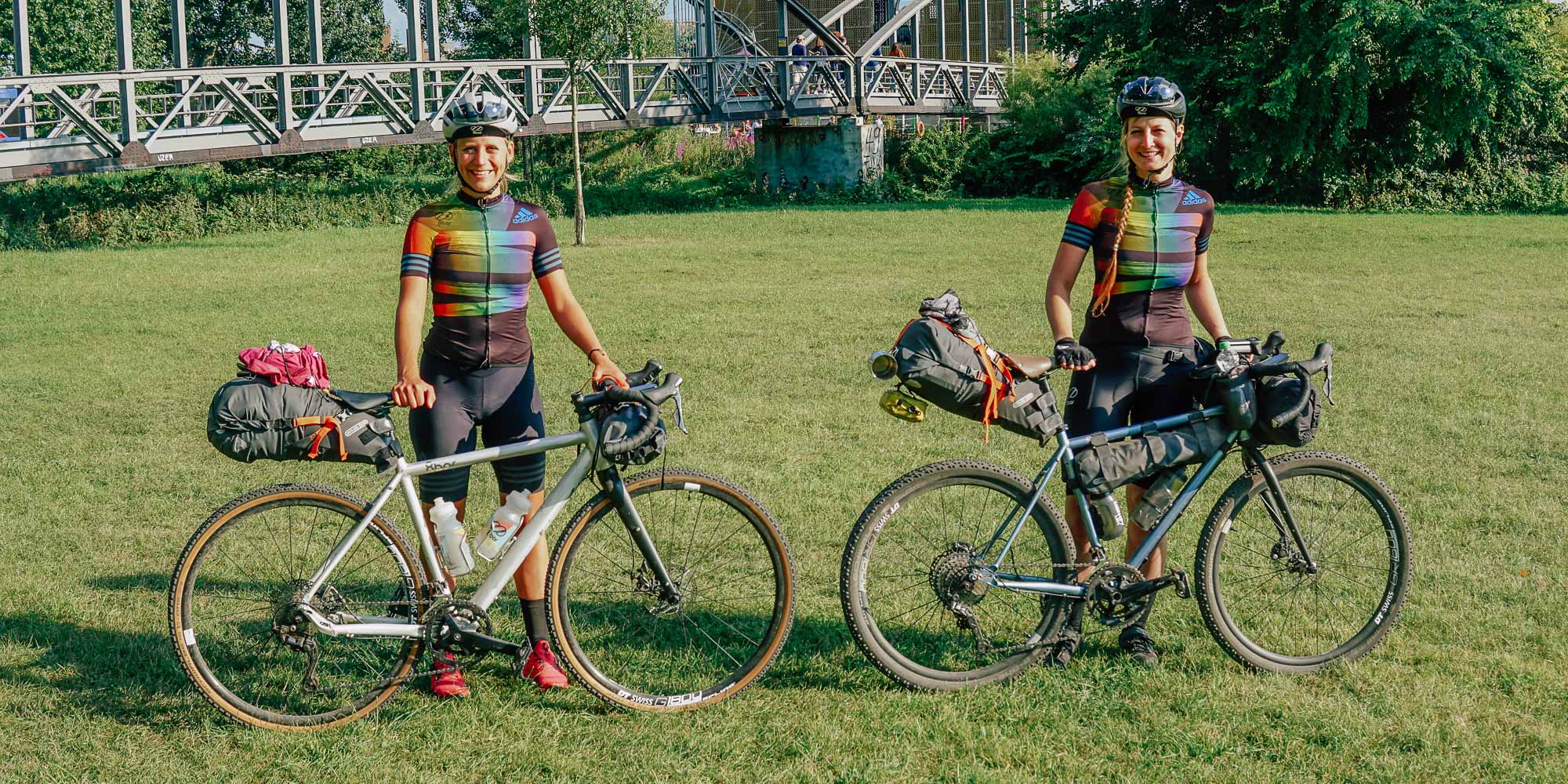 Shortly after 7:00 am the bikes were ready, loaded with almost everything we would need for the next 4-5 days. Everything had been stowed away neatly or stuffed with emphasis into the bike packing bags and strapped down. The excitement rose. Was the tire pressure right? Was the chain sufficiently oiled? Quickly check again! Were all technical devices enough loaded and the routes prepared for the navigation system? Okay? Then we could start! It was the first Saturday in August 2020 when we, Wiebke and Juliane, part of the still quite young 8bar Gravel Team* (more details below), got on our bikes together with friends and headed off to the meeting point, the starting point of Holy Gravel 2020. This is our travel report, written from Juliane’s perspective.

The Holy Gravel is a self-supported ride through the German North on gravel and forest roads mixed with paved lanes and road sections. Numerous paths and hiking trails with crisp climbs challenge the legs and technical cycling skills in the most entertaining way. The event took place for the first time in October 2019 in very harsh weather conditions and should now be reissued as a summer edition. Start and after a long, winding route through Schleswig-Holstein, end of the tour is in Hamburg. The Holy Gravel is not a race, but a gravel ride with like-minded people who are on the same track. This route was sent in advance by e-mail to all registered persons. During the trip we could decide whether it should be the shorter, almost 555km long or the long, approx. 740km track with a detour to the Baltic Sea island Fehmarn.

Wiebke and I had, besides a tent and other sleeping equipment, all things in our bikepacking bags, which we had strapped directly to the bike. Wiebke is riding an 8bar Bikes MITTE v2 in silver polished raw with 2×10 Shimano GRX parts, Schwalbe G-One Ultrabite in 40 mm width and DT Swiss G1800 rims. My gravelbike is an 8bar Bikes MITTE Steel v2 in deep sea blue metallic with 2×11 Shimano GRX parts, Schwalbe G-One Bite tires in 2″ and DT Swiss GR1600 rims. With this equipment we were well prepared for the coming days at Holy Gravel 2020.

We chose the shorter, but no less varied route. The Holy Gravel 2020 should be a Gravelbike Adventure for us, which should challenge both of us in very different ways. We had never been on a bike trip together before. But we soon realized that despite different conditions and fitness levels, the basis was just right! After starting in Hamburg in the morning, we rolled out of the big city on beautiful paths along the Elbe river. We went on directly into the countryside over the first hills and trails. In the coming days in Schleswig-Holstein we should learn that the north of Germany is not quite as flat as they say… We often met other participants of Holy Gravel. Soon Wiebke and I joined a small, partly changing group with which we would spend the coming days. The team within the team so to speak. The first Franzbrötchen stop followed after just under 35 km. With almost 30°C it was not so easy to eat all the time. But for this demanding tour we needed extra energy and above all a lot of hydration. Furthermore, the route on the first day made it difficult for us to buy food on the way. Because we cycled past many small villages instead of through them and these often had no shops either. So in the afternoon we even made a detour off the route to have a well-deserved break in a café after about 100km.

While our 8bar bikes were running without any punctures so far, we watched some others who had less luck and got one flat tire after the other. Wiebke and I both had tubeless Schwalbe tyres and rode back to Hamburg without any problems.

But in the afternoon a chain caused problems and finally resulted in an unplanned break. Unfortunately the chain lock that was carried along did not fit properly. So the next 70 km involved a cheerful clacking of the chain, which could only be fixed in the evening with the help of a friend. Fortunately we had no further breakdowns during the whole tour. But before we finally started looking for a place to sleep, we had to turn off the track again in order to finally find a supermarket and get some dinner. We took the last trails and height meters in the dreamlike light of the dusk. When we finally pitched our tents on the meadow of a fishing club at the lake at about 9 p.m., there were almost 170 km on the tachometer. What a first day!

Well rested we went on the second day on the Holy Gravel Route. It took us directly to the North-Baltic Sea Canal and on miles of sandy paths to the ferry, which should bring us over the water. Of course we had a second breakfast to regain our strength. The day was supposed to be a tough one. It was not only beautiful and varied in terms of the routes, but also quite…explosive in terms of the weather. There were some altitude meters waiting for us, which we climbed partly on very narrow paths, partly on wide gravel tracks. When we finally reached the Baltic Sea in the afternoon, dark clouds had already appeared behind us. But first we could still escape the rain and followed the Holy Gravel Track along the steep coast. It offered us great views of the sea, while we fought our way with the bikes through fine sand, past thick reeds and over stick and stone (and stairs). Finally it began to drizzle.

The hope that the rain would pass by quickly settled when the wind got stronger and finally the rain began to fall. The only thing that helped was to assume and hope that it would soon be over. However, it was practical that our small group of four had taken refuge under the roof of a marina with a restaurant by chance! Dusted off from the day we sat in the entrance area of the restaurant, where we also directly ordered warm dinner. During the one or other joke with the cook, we waited for the rain to stop in the best possible way. It could have been worse ;-).

But when we left, the storm was not quite over yet and a few kilometers later it came over us while we tried to find shelter under some trees and bushes. Yay, that would be a funny and above all dirty continuation of the journey! Finally we reached the city Kiel in the early evening and discussed how to continue and especially where to stay overnight. It was already 20 o’clock through and the long day made itself physically noticeable. But in the end we all agreed: A night trip was on the agenda. And while the darkness settled over the country and we rode our bikes in the light of the full moon, we could cool down a bit in the fresh night air. So our small group cycled towards Plöner See mainly on tarmac roads. Why did we do that= because there was a comfortable sleeping place waiting for us in the house of a friend. And that was defitnitely worth it to ride through the night. At the end of the day we had managed another 160 km.

The diversity of Schleswig-Holstein

While the second day on the track included a lot of climbs in the North German mountains, day three started with a ride through the small town Plön with the lake of the same name next to it. We had a stop at the bike shop to refill used materials and to enable a relaxed continuation of the journey. The day was marked by routes along the numerous lakes of the region, castles and impressive views of the hilly landscape. Shortly before Lübeck we changed saddles! The bikes were loaded into a bus, which took us quickly and easily through the Herren Tunnel to the other side of the Trave. And on we went to the Ratzeburger Lake. The following night Wiebke and I spent together with a few other participants of the Holy Gravel on a camping site directly at the lake.

On the last and fourth day of this bikepacking tour Wiebke and I took it easy. It was only about 110 km to Hamburg and we had all day. Relaxed. So there was enough time for photos, a break by the roadside and for lunch at a nice countryside restaurant. We continued to ride in pleasant company and enjoyed the time on the bikes. Also on this day the Holy Gravel Route did not disappoint. Besides gravel and forest roads, there were some mossy paths through the woods or even a bit of paved roads. The forest trails were nicely cool and we even entered the Hanseatic city on green lined paths. In the late afternoon the 8bar Gravel Team arrived in Hamburg Entenwerder. We finished the nearly 555 km long gravel and off-road tour through Schleswig-Holstein very proud and happy. And we would love to start again right away! You can find more images and stories about the Holy Gravel 2020 in the blogs by Wiebke (www.packandtri.de) and Juliane (www.radelmaedchen.de)!

The 8bar Gravel Team is the offroad chapter of the successful Fixed Gear racing team. No barrier tapes, no borders! The 8bar Gravel Team prefers to ride on gravel and forest roads off the beaten track on gravel events or their own tours. We explore our surroundings, challenge ourselves, whether on narrow mountain trails or in the Brandenburg sand!  We ride our bikes sometimes fast, sometimes relaxed or with luggage in bikepacking mode – but always with a good portion of adventure desire! Always with us: The changeable 8bar bikes MITTE and MITTE Steel as Gravelbike Set up. Whether with sporty cross tyres or wide 2″ tires, suitable for trails, the variety is almost limitless. Just as different as the trails we ride are our team members, some of whom come from fixed gear racing, others from leisure sports. Since 2020, a team of three women has also been riding for the 8bar Gravel Team. The first adventure Wiebke and Jule had together was the bikepacking self-supporting tour Holy Gravel 2020. Another episode took the men’s 8bar Gravel Team to Scotland and the Highlands for example. More adventures will follow… Photos: Juliane Schumacher, Wiebke Lühmann, Matthias Maul